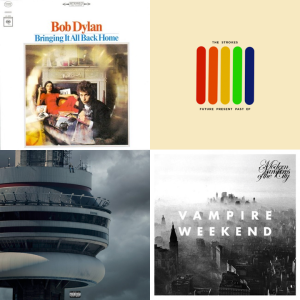 Here’s what I’ve been listening to lately:

Bob Dylan’s Bringing It All Back Home.

I realized recently that I don’t listen to a lot of Bob Dylan, and that I needed to fix that to keep my rock cred. I decided to start with Bringing It All Back Home, his fifth album. This is best known as the album where Dylan made a move to electric rock and roll, which was divisive at the time. On a side note, if you stumble across older music, I highly recommend reading about its history and what people thought about it at the time it was released. It’ll inform your contemporary understanding and help you to trace its cultural importance.

What I love most about this album is its exploration of bohemia, for all of its good and bad aspects. Songs like “Subterranean Homesick Blues” and “Mr. Tambourine Man” are steeped in the political lyrics that Dylan is known for, which is reminiscent of what we’re going through today re: the 2016 election.( I can’t think of one artist who’s channeling Dylan today for the same purpose.) For the most part, he shines light on hippie shortcomings and tries to create some distance from the folk movement he’s so closely associated with. I’m still trying to decipher the enigmatic lyrics and what they could mean, and that’s how I know I’ve stumbled across a great album.

It’s hard to pick my favorite tracks, but I especially dig “Subterranean Homesick Blues,” “It’s Alright, Ma (I’m Only Bleeding)” and “It’s All Over Now, Baby Blue.” Now that I’m wading in the Dylan pond, I’m excited to see what I discover next.

The Strokes’ Future Present Past.

Since high school, The Strokes have been one of my favorite bands. I was beyond excited when Future Present Past dropped out of the blue on Thursday morning, so much so that I impulse-bought the vinyl and didn’t care about the shipping cost. That’s how you know it’s real.

So much of The Strokes’ music focuses on the recurring themes of growing up, with the energy that only youth can harness. I think this is summed up so brilliantly in “Hard to Explain” from Is This It?: “I missed the last bus / I’ll take the next train / I’ll try, but you see / It’s hard to explain.”  You try and you try and you try, but you can never feel like you can get everything right — which breeds feeling of existentialism, debates of right and wrong, and of course, star-crossed love. From that first incredible record all the way to this three-song and bonus remix EP, the Strokes have tried to navigate these feelings. “Oblivius” picks that back up: the repetition of “What side are you standing on?” suggests a conflict on both personal and political levels, something frontman Julian Casablancas explores deeply in his solo work. Anyone who has ever been a young adult can find some resonance in the Strokes’ lyrics, and as someone who is on the precipice of Real Adulthood the Strokes are more important to me than ever.

My favorite song is “Threat of Joy,” because it sounds like quintessential Strokes from the riffs to the lyrics: “I cannot wait to chase it all / Yeah, I saw it in my crystal ball.” I cannot wait to see what else they unveil. Viva la Strokes.

A couple of weeks ago, Ezra Koenig played “Step” on his radio show, which made me realize that I hadn’t listened to the entirety of Modern Vampires of the City in a really long time. This album came out while I was still in college, and I spent a lot of time walking across campus and studying with it in my ears. I didn’t expect to be hit with so many waves of nostalgia when I replayed it this month, which I think mostly stems from the fact that I am back on campus but no longer a student.

Modern Vampires of the City is a dense album that deals with ontological themes of mortality, religion and time in a masterful way. If you trace the tracks as one narrative, you can see that the narrator is attempting to seek out deeper truths about who he is and his place in the world, and rebelling against what society is telling him to believe and accept. But these beliefs are also very contradictory, which makes it so wonderfully relatable. One of my favorite lyrics of all time comes from “Unbelievers,” where the narrator is simultaneously trying to work out some heavy romantic and religious stuff:

Is this the fate that half of the world has planned for me?
I know I love you, and you love the sea
But what holy water contains a little drop, little drop for me?

Later in the album on “Ya Hey,” which deals almost exclusively in Christian allusions, the narrator is extremely critical of God and faith in something that seems so removed, despite wanting that for himself earlier:

Through the fire and through the flames
You won’t even say your name
Only “I am that I am”
But who could ever live that way?

There’s a lot of other examples throughout Modern Vampires of the City that could fill a whole book about this album’s cultural relevance. What I love most about it is that Modern Vampires of the City reminds me that I’m not alone in trying to figure out the deeper purpose of my life in relation to bigger cultural mores. Ezra Koenig is one of my favorite musicians that I find a kinship in. My favorite tracks are “Unbelievers,” “Step,” “Hannah Hunt” (The beat drop at 2:31 is better than most beat drops in all of music),  “Ya Hey” and “Young Lion.” Rediscovering this album now has solidified it as one of my favorites, and I’m looking forward to rediscovering it over and over again.

In general, I thought Drake’s Views was a huge disappointment. It’s about 10 tracks too long. It doesn’t have as many bangers as If You’re Reading This It’s Too Late. The album version of “Pop Style” doesn’t have the Throne feature. And to top it all off, Future is a track-ruiner. It was so hyped and overdue that Views could never have been as good as everyone thought it was going to be.

I’m also not really interested in Drake’s lyrics — even though I love the bravado and one-liners that IYRTITL perfected, I don’t care for angry-that-a-woman-slighted-him Drake, which is a pervasive theme on Views. The narrative of “Hotline Bling,” for example, is really about Drake being upset that his ex is out living her best life without him. From my point of view, it’s really none of his business. This lyrical content is old, and doesn’t do anything to help Drake grow as an artist.

With all that being said, the Jamaican dancehall tracks are the best part of Views and the songs I think will have the most longevity in the pop culture sphere. These tracks are “With You,” “Controlla,” “One Dance” and “Hotline Bling.” Drake and Noah Shebib, his record producer, have picked up some samples that scream eternal summer vibes. Even though the lyrics are horrible, the beats are infectious and examples of good producing. I will probably end up playing them all summer as part of my driving-around playlist, and I will definitely forget that the rest of Views exists.

What have you been listening to lately? Let’s talk about it in the comments.