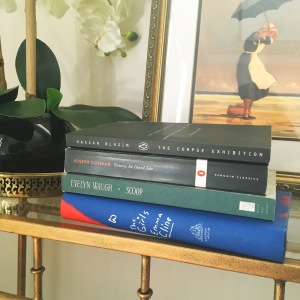 To help me stay on track in my 2016 goals, I’m documenting the books I read all year. Here’s what I read in July:

I first heard about The Corpse Exhibition at a literature lecture at my alma mater. I keep a small notebook in my purse at all times so that I can scribble down names, titles or phrases I like when I’m at a lecture like this, or just out and about. The Corpse Exhibition was one of those book titles, and was brought up as an example of literature about life during wartime — and most importantly, written from the Iraqi point of view.

The Corpse Exhibition is a collection of Blasim’s short fictional stories. I knew the 200-someodd page book wasn’t going to be an easy read, based on the context alone. I had to put it down after every few stories, because they all deal with some heavy shit. There is a lot to unpack in every story: extreme violence, family relationships, nationalism, philosophy and legacy.

What struck me the hardest in The Corpse Exhibition is how every story points back in some way to the precarity of the body. For some characters, the body is a gruesome reminder that life can be taken away at any moment. For others, the body is expressly a political tool. And sometimes there’s a disconnect between physicality and identity that leaves one adrift. I cannot imagine living like that.

For the people in these stories, the war is always looming — even if it’s not explicitly mentioned. It permeates every aspect of their life, which is very hard for most Americans to wrap their heads around. It’s so, so important that we make room for voices like Blasim’s, because we usually only get one side of the narrative. The people who live in the Middle East are also humans just like everyone else with stories to tell, and both politicians and mainstream media conveniently forget that.

Reading The Corpse Exhibition in today’s political climate is extremely timely, and I highly recommend it. It’s hard for me to pick a favorite story from this collection, because all of them are very good.

I am a Big Fan of Joan Didion, and because Victory: An Island Tale was at the top of her favorite books list, I wanted to check this out. Last month, I read a novel that Victory inspired — while that wasn’t one of my favorite books either, I thought that if Joan (we’re on first name basis around this blog) liked it I would too. Before this novel, I had not read any Conrad so I had no idea what I was getting myself into.

Victory is a sizable novel that’s broken into three parts. The story centers on a European white dude named Axel Heyst, who is extremely cynical and tries to lead a life of detachment. Because of a series of events, Heyst ends up working for a coal company in Indonesia. While there, he meets a woman in a traveling musicians group who is being abused by the local hotel’s proprietor. Heyst takes her away to his own private island, and the hotelier exacts revenge.

I’m not 100 percent why Joan likes this novel or Conrad so much, because I thought it was was terribly inconsistent. I spent part of my reading time referencing summaries, because the story was hard to follow and had a lot of sidebars that I didn’t know what to do with. Conrad is supposedly known for his command of the English language, but I was not impressed. The ending, although very sad and predictable, was the only part of the book that I thought was good and lived up to this book’s “psychological thriller” label. And on top of all of that, Victory had a post-colonial setting with no real commentary on why that was important. Lena, Heyst’s lover, had no dimensionality and basically served as a plot device.

I’m glad that I read this book because I have a Conrad example in my knowledge fund, but I didn’t enjoy it. If anything, this book has taught me that it’s totally fine if your reading list deviates from what’s considered canon. In my experience, most of it isn’t that good anyway.

Goodreads recommended this book to me about a month ago. When I read the synopsis of this book, I was immediately on board for a book by a woman that talked about journalism. Halfway through the novel, I found out that Waugh was actually an English man and journalist who was fed up with the industry’s dubious practices. So it goes.

Anyways, this satirical novel is set in England in the 1930s. Because of a name mixup with his much more famous cousin, a writer named William Boot is sent to cover a political revolution and civil war in a fictional African nation. Everyone involved, from the men who run the newspaper he writes for to the fellow journalists Boot meets, is extremely incompetent. They don’t shy from bending the truth and trying to pull one over on the publication.

Scoop‘s plotline is pretty entertaining and engaging, but in 2016 it seems pretty dated. There is literally no money for journalists to use to write off unnecessary expenses, and the ethics and accountability is a little bit stronger in an age where everyone on Twitter will fact check you. Waugh wanted to showcase how much journalism’s ethics had slid by this newspaper boom of the early 1900s, but I wonder what he would think about today’s climate.

If you are a fan of British humor, you will probably like this book. I will put Brideshead Revisited on my list, but I’m not in a hurry to read it. If you’ve read Evelyn Waugh and like his work, I’d also recommend Neil Gaiman and Terry Pratchett’s Good Omens.

The Girls has been getting a lot of good press lately in the literary world. I had read the Goodreads summary for it when I first heard of the book, and I was immediately intrigued.

The Girls is the story of a woman named Evie Boyd, who gets involved with a Charles Manson-like cult in 1960s Northern California. As an adult, Evie is pulled into retelling her part of the narrative. Teenage Evie is trying to navigate adolescence and her parent’s divorce, and is initially entranced by the woman who drew her to the group, Suzanne. Evie lives with one foot in her real life, and another in the world of the ranch the group is homesteading on. This novel deals in themes of adolescence, sexuality and liminality.

In particular, Cline does a really great job of meditating on the idea of orbiting. Evie feels a magnetic pull to the group, and its history becomes a part of her. Even though Evie doesn’t partake in the violence the group eventually commits, the story still unsettles her — as an adult she spends a lot of time, thinking about the what-ifs and where her life would be. Someone’s presence in your life can influence you in incredible ways, whether you realize it immediately or later down the road. Looking at someone’s story through this angle makes someone much more human, rather than someone who was casually connected to murder.

The only thing I didn’t like about this book, which is mostly my fault, is how liberally Cline borrows from the Manson story. Last fall, I listened to a superb podcast about Charles Manson’s Hollywood. I totally understand Cline’s fascination, but I knew exactly how the cult plot of The Girls was going to go. If you’re interested in The Girls, it’s better to know close to nothing about the Manson murders going into reading the novel. When you’re done, definitely check out the podcast.