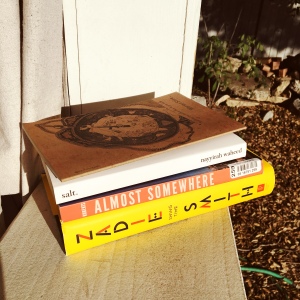 2017 is my year of reading books written by women. Here’s what I read in January:

Warsan Shire’s Teaching My Mother How To Give Birth.

Teaching My Mother How To Give Birth has been on my to-read list for quite some time, far before Shire’s involvement in Beyonce’s Lemonade. You may have seen the Somali writer and poet’s words in the news recently. In response to the Trump administration’s recent ban on immigrants from Muslim-majority countries, protestors have quoted from her poem “Conversations About Home” (which is in this book): “No one leaves home unless/home is the mouth of a shark.”

These poems are about Africa, trauma, tradition, gender, displacement and precarity in all of its forms, and they are often uncomfortable. The common thread is Shire’s searing observations on the female body in Muslim culture — the prize of virginity, the things women must do to keep their husbands’ attentions and the othering of her body when juxtaposed against white women. But Shire’s narrator also seems to urge her female readers to view their femininity as a source of exceptional inner strength. My favorite poem is actually the last one, “In Love and In War”:

To my daughter I will say,

‘when the men come, set yourself on fire’.

This was actually the last book I read in January: I wanted something short to fill in the last few days, and I read this 38-page pamphlet of poetry in about an hour. If you don’t normally read poetry, try reading this pamphlet — I think you’ll find it extremely enlightening in today’s political climate.

I became a big fan of Nayyirah Waheed’s poetry when I followed her on Instagram, where she reposts a lot of the poems you find in Salt. I wanted to read the collection in full, and I’m so glad I did — Instagram screenshots of the poems don’t do the words justice. Most of the poems are often two lines and rely extensively on enjambment — line breaks in middle of sentences.

Waheed’s poetry touches on so many points all at once: the black woman experience, the magic of femininity, the fragility of masculinity, the power of the earth and the elements, and the importance of a resilient relationship with your own self. Waheed’s intended audience seems to be other black women and women of color, and I had to assess my own role as a white woman reading these poems. I think reading and supporting the work of women of color is crucial to working towards being truly intersectional, and I want to make an effort to understand their experiences more fully.

Each poem tells its own story, but it’s all extremely cohesive and breathtaking. I am in awe of how Waheed can turn simple words into such profound and complex ideas, and she makes most of the poetry I’ve read up until this point seem clunky and inarticulate. That’s how much I love Salt.

not knowing your power

It’s impossible for me to pick one favorite poem from Salt. Every single poem is beautiful, insightful and haunting. I will return to this poetry collection over and over again.

In my mission to read more books about California written by women, I came across this delightful memoir. After she graduated from college in 1993, Roberts and two friends decided to hike the John Muir Trail from Mount Whitney to Yosemite Valley. Along the way, they run into all of the problems you think they’d have: tense group dynamics, bears, injuries, food shortages and weird dudes. In her travelogue, Roberts reflects on her thoughts about her future and often leans on Muir’s words and writings to contextualize her feelings.

The main thing I liked about this book is that it’s a testament to how powerful the human and nature relationship is, and that believing in that power can provide spiritual and emotional clarity. In the California context, it made me realize how important it is to preserve our natural heritage so that people can have those experiences. Roberts-as-her-character isn’t particularly sympathetic, but by the end you’re rooting for her to find her way. And it did make me want to attempt the same trip, even though I am definitely not a hiker. It’s a solid 4/5 stars on Goodreads.

Swing Time, which is named after a Fred Astaire movie, follows two British women and the course of their friendship: an unnamed narrator, who is an assistant to a pop star, and her childhood friend Tracey, who attempts to pursue a career as a dancer. Both women are biracial living in 1990s England, and dance is their common interest. As they grow up, their lives diverge and intersect. But the main thing to note about the plot is that it’s framed in the unnamed narrator’s firing and her explanation of how it happened, which is engulfed in her history with Tracey. You learn about all of the characters through the narrator’s lens, and because she’s not particularly likable nor introspective you stay at the surface-level.

Here’s my deal with Swing Time: Smith executes the plot flawlessly and everything comes full circle in a satisfying way. This joins My Brilliant Friend in the vein of real, complex female friendship dynamics. The ideas of black bodies in white spaces, class differences and political privilege come up over and over again in smart and nuanced ways — especially when mirrored against dance, which is arguably a social equalizer.

But although this book made a lot of best of 2016 lists and I did enjoy reading it, it’s not my favorite Smith novel. I read On Beauty in 2015, and that novel’s universe was more immersive with dramatic stakes that that felt higher — a refreshed, academic, American version of E.M. Forster’s Howards End. Smith also has some really good essays and short fiction, and I would recommend starting with those first.