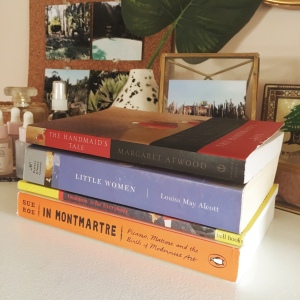 2017 is my year of reading books written by women. Here’s what I read in February:

This is the first of anything I’ve ever read from Margaret Atwood, and two things brought me to this novel: the upcoming Hulu show, and its resurgence in literary discourse as an example of dystopian fiction.

In The Handmaid’s Tale, the United States government has been taken over by an extreme Christian movement that strips all women of their rights — including the ability to read. The government creates a class of women — called handmaids — and who are specifically given to government leaders for (somewhat) clinical reproductive purposes. The story is told from the perspective of one of them — Offred — who is the handmaid for a high-ranking official in  a dystopian New England. As Offred describes what has happened to her and embarks on an illicit relationship with the official, we learn about how this society came to be and works.

This book was so profoundly affecting that there were a couple of moments where I had to put the book down and go do something else. Based on the American political climate and the current administration’s priorities, this dystopian fiction seems like it could turn into reality at any moment. The handmaids have been indoctrinated into being surrogates as punishment for having political and sexual agency. I don’t know or hope that our society would ever get to this place, but defunding the clinics that keep women healthy, limiting access to birth control and abortion and doing very little to combat economic inequality looks like a step in that direction. The subtext of this novel is also that women were unappreciative of feminism activism, and that this indifference contributed to this social outcome.

I wish that I had learned about this book when I read George Orwell’s 1984, Ray Bradbury’s Fahrenheit 451 and Aldous Huxley’s A Brave New World, which are all always mentioned with admiration. Atwood takes a far more complex storytelling approach with interweaving flashbacks and a metafictional epilogue, and I’m far more interested in reading a book about a dystopian female experience than I am about another white dude. I would highly recommend this book, especially to people who are trying to read more books about women written by women.

I spent a significant portion of my childhood poring over books like the Little House on the Prairie series and Betsy-Tacy. I definitely self-identified with the young female protagonists, and the time period these books came from enraptured me: living in a dugout wearing gingham dresses and eating cornbread sounded so magical at the time.  Somehow I completely missed Little Women, the book and the movie.

For those of you that don’t know the story, the novel centers around the March family — mostly the four sisters Jo, Meg, Beth and Amy — and chronicles growing up as women in the Civil War era. There’s a not-subtle-at-all Christian theme to the book, and the gender roles are very traditional.

It’s interesting to read this kind of book as an adult, because I could see my 9-year-old self falling deeply in love with Little Women and its characters in the same way I did the other books. I would have pretended that I was Jo, and probably would have made my sister be Amy. (I have no shame in divulging that I dressed as a pioneer girl for Halloween one year / I’d play Pioneer in the backyard, so I probably would’ve played Little Women too.) I probably would have thought Laurie was Man of the Century, and I would have wanted to transform my backyard fort into the March residence. This novel would have done some serious damage to my little heart.

As a 23-year-old woman with a literature degree, I’m obviously much more critical of the story and themes than I would have been as a kid. There’s this specific tone to this novel’s era that a lot of young people miss (including myself at the time) just because they don’t have the historical knowledge yet and the wits to apply it. These books, including Little House and Betsy-Tacy, were written for white women mostly by white women to promote a very specific image of white womanhood. They focus on the romance and debutante lifestyle, while effectively sanitizing the violence and racial strife. The Civil War intersects with Little Women in that Mr. March goes off to fight for the North and the family has to incur the hardships of life during wartime, but that is really the extent of its involvement in the story. And for the most part, the women in this book stay inside of the expectations of their gender and follow the traditional path to motherhood.

I don’t mean to underscore this book’s importance. Alcott helped to shape 19th-century American literature, and it’s a sociological example of what and who people wrote about. I know several women that I love who love this novel. But for me, it boggles my mind that Little Women really could have been formative for me, but the delay in reading it until adulthood altered that course. This is my main takeaway from this reading experience — it makes me think about other books I have and haven’t read in a different light.

And for one final, less-measured observation — the latter part of the book where Jo marries a much older professor in like, two-and-a-half seconds is straight up garbage. Shout out to all of the readers in the 1870s who felt the same way.

bell hooks’ Feminism is for Everybody.

After the Women’s March and the increasing political attacks on women’s healthcare, I felt like I needed to read more about the history of feminism and round out my theoretical knowledge. This is the first book I’ve turned to.

Whoever you are, whatever your level of knowledge is and however you feel about contemporary politics, you need to read Feminism is for Everybody ASAP. The book is exactly what the title says it is — hooks makes a powerful argument that working towards a feminist society is beneficial for everyone. She lays out the entire theory and history in such an easily digestible way, so you really have no excuse. There is no better political moment than the present to read this in.

There were three significant things I got from this book. First, hooks provides a definition of feminism that I completely agree with. According to hooks, feminism is “a movement to end sexism, sexist exploitation, and oppression.” This comes from a far more intersectional approach than just equality of the sexes, because it’s a lot more complicated than that.

Secondly, I now have the vocabulary to fully articulate why you cannot simultaneously be anti-choice and feminist. Telling women what they can and cannot do with their bodies works to preserve a system of oppression.

If feminism is a movement to end sexist oppression, and depriving females of reproductive rights is a form of sexist oppression, then one cannot be anti-choice and be feminist. A woman can insist she would never choose to have an abortion while affirming her support of the right of women to choose and still be an advocate of feminist politics. She cannot be anti-abortion and an advocate of feminism.

And thirdly, I got more context about second-wave feminism that I didn’t have before. Learning that white women became the movement’s face over the women of color who were the first organizers and activists reaffirmed my belief that all of our work must be intersectional. A lot has changed in the last few decades, but we still have a lot of work to do and a lot of education to spread.

Once you read this book, read Roxane Gay’s Bad Feminist and Chimamanda Ngozi Adichie’s We Should All Be Feminists.

Sue Roe’s In Montmartre: Picasso, Matisse and the Birth of Modernist Art.

When I pick up art books, I have always preferred narrative nonfiction to traditional textbooks. The stories about how the art came to be in communities are much more compelling than the “this art movement was a thing from this year to this year” overarching approach, and the info sticks with me better. Sue Roe does a really good job in painting these scenes, and her latest book, In Montmartre, draws out the beginnings of modernism in the Parisian neighborhood. It’s pretty incredible that in just a decade — without any real kind of technology — a small community of men and women created art, music, dance, literature and fashion that has been everlastingly influential.

And their lives were anything but glamorous. In the context that these artists’ paintings and sculptures sell for millions today, many people think that they have always been successful. That wasn’t the case at all. In In Montmartre, you read about the nearly-condemned studio space penniless Picasso worked in, and the familial tragedy Matisse dealt with in tandem with artistic and critical frustration. It puts hard work, creativity and talent into perspective — big things happen one day at a time.

I will say that you already have to be somewhat interested into modernist art to really enjoy this book. Knowing the art and who the people are makes the drama far more compelling, and makes the stakes feel a lot higher. There are several moments in the story where everything could have gone sideways and art history would have had a much different outcome. I do recommend starting with Roe’s The Private Lives of the Impressionists before reading this book. You’ll have a better sense of bearings, and some references will be clearer.