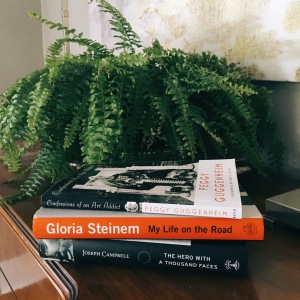 To help me stay on track in my 2016 goals, I’m documenting the books I read all year. Here is what I read in April:

My Life On The Road, by Gloria Steinem: Gloria Steinem’s memoir had been on my reading list for awhile, because although I’ve read about her I wanted to learn more about who she is and what she stands for. All of the history classes I took glossed over the second-wave feminist movement (big shocker there), so I’ve been curious to learn more about her and why she’s so revered.

I also went into reading My Life On The Road a little guarded because of her recent Hillary Clinton comment, which made me wonder whether or not I wanted to bring this book into my life. After finishing her memoir, I still think she has great intentions and has done a lot of good for American society, especially women. As an itinerant organizer for the feminist movement, Steinem has spent most of her career traveling from place to place. The memoir centers around the lessons she’s learned and the people she’s met while living a nomadic life.

My Life On The Road is more of a collection of her traveling stories rather than a chronological telling of Steinem’s life, which felt disjointed most of the time. It was overwhelmingly apparent that Steinem, as a white woman, has been very privileged. While she repeatedly says she celebrates diverse women and points of view, she doesn’t do the best job explicitly reflecting on how her privileges have helped her be the person and public figure she is.

There were a few things about this memoir that I did like. Steinem is open about her personal experiences, and shares a lot of intimate moments from her life that I found to be very moving. I enjoyed reading about how she came to identify as a feminist, and why it was important for her to campaign on the behalf of women everywhere. It’s so important that we have a record of the women who are responsible for stirring up social change, and I’m proud of Steinem for taking up the cause.

I would recommend this memoir to someone who is already interested in feminism and has read a lot of other books about the movement. It is by no means the end-all, be-all of feminist thought, but Steinem has inspired me to seek out other intersectional voices — especially Alice Walker.

Confessions of an Art Addict, by Peggy Guggenheim: I had a brief Truman Capote obsession when I was in high school, and Peggy Guggenheim’s name came up repeatedly when I would do research. For those of you who aren’t familiar, Guggenheim was an art collector who championed artists like Jackson Pollock. When I found out she had written a memoir, I was intrigued to see what she had to say about modern art and why she loved it so much.

My initial perception was that she lived her best and most artistic life, and in some ways that was true. But her life was also particularly tragic. In addition to not having a great family life (her father died on the Titanic when she was young), she was married unhappily twice and worked in and around a male-dominated business. She acknowledges most of this, but she doesn’t give a lot of details or deep introspection about her life and what she did — for example, I was surprised to find out after I finished Confessions of an Art Addict that Guggenheim considered herself a nymphomaniac, which did not come up at all in the book.

This memoir is not particularly well-written either, and she doesn’t have anything that riveting to say about the art she collected. Guggenheim gives wonderful anecdotes about working with Pollock and other legendary artists, living around the globe and midwifing the birth of American modern art. But in spite of her unhappiness, she marched to the beat of her own drum and sought refuge in the art she collected. She was very passionate about being open with her collection, and was critical of how the art market has grown to be a game rather than cultural preservation. I can’t even fathom what else she would have been able to do for the art world if prices hadn’t astronomically risen. If you read this book and are as fascinated by Guggenheim’s life as I am, you’ll probably also like this documentary about Iris Apfel.

The Hero with a Thousand Faces, by Joseph Campbell: Way back in December when I saw Star Wars: The Force Awakens, I was so fascinated with the Star Wars mythology that I wanted to read The Hero with a Thousand Faces. This is the book that inspired George Lucas to lay out the Star Wars universe and build it around Campbell’s interpretation of monomyth and the hero cycle. The book basically lays out the archetypal hero’s journey with many, many comparative examples from mythologies around the world. The overall point is that all of these hero stories are incredibly similar, and that we as readers can learn a lot from that.

It took me three months to finish this 300-page book, which is my equivalent of forever and 100 years. I’ve read a lot of really dense literary theory, and I struggled to read it at the pace I’m accustomed to. It didn’t engross me, so I put it down several times to read fiction. I’ve read that people think The Hero with a Thousand Faces is life-changing, but I obviously didn’t have that experience. There were a few stories from different cultures that drew me in, but I’m surprised that so many people find its language and structure accessible.

I still found it to be really informative, and think that it should be required reading for literary studies students. I wish I would have discovered it as a literature student, or that it would have been some kind of seminar discussion text or summer reading assignment. It would have been a good resource to help me with understanding and analyzing stories I read for class, and given me a better idea of what comparative literary studies is. I don’t think I’ll read other Joseph Campbell books anytime soon, but I’m glad I got through it.